The original Meridian Underground Music Exchange opened its doors at 809 22nd Avenue in downtown Meridian, MS on February 1, 1996.  Wayne and Stacey Williams were about to embark on a worthwhile adventure.  The couple started the store with their own personal CD collection, 230 CDs, and a few necklaces.

The Move
In June of its inaugural year, the two owners decided it would be a wise choice to move the Underground four doors down to a new location.  The move was historical, literally!  We moved our store into the Peavey Building, which is the original building where Peavey Electronics was founded.  The store went over very well with the public.  By April 1997, a room next door was added, and a hole was knocked into the wall to gain more space for the store’s rapid growth and development.

A tanning bed was added to the rear of the second room.  The rates for tanning beat every other tanning salon in the area.  Many happy customers have since gotten a great deal on some good rays!

The new addition was also home to weekly poetry meetings that were held on Thursday nights.  The crowd for these events would range from 15 to 30 people.  Coffee was served and once in a while a live jazz band would perform.  Many featured poets would do hour-and-a-half performances.  The meetings lasted throughout their inaugural summer.

A New Opportunity for Musical Acts
The jazz band performances lead the path to other local bands wanting to play at the Underground.  So every few weeks, the Underground would host a Jam where four local bands would get an hour each to play their hearts out.  The Jams were free to the public and always had a good turn out.  Halloween 1997 prompted one of  the Underground’s biggest and best concerts.

About 75 people turned up at the the 1997 Halloween Jam.  Almost everyone was decked out in some type of fabulous costume.  It was such a big hit that Halloween Jams will be held every year from now on!  Click here to see some of the outfits!!! 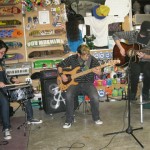 After the Halloween Jam, the shows went on hiatus until the weather got warmer.  During the winter months, the store’s merchandise supply grew so much that there was no longer enough space to hold the concerts in the second room.  In May when school let out, the local bands started coming back wanting to play.

The decision was made to have the concerts on the sidewalk in front of the store.  Parade permits were issued, and the Meridian Underground began hosting sidewalk jams. There have been about 15 sidewalk jams since 1998 with bands like The Cooters, Chains of Flesh, Vapid Butchery, and many others.

The Underground Today
The store now has over 2,000 new and used CDs in stock, as well as countless other unique and trendy items for sale. In 2001, we built a small stage to host concerts and raves in our back room.  We have new events coming soon and other projects in the works.

Located in downtown Meridian, Mississippi, our shop has been specializing in new & used CD’s, vinyl, instruments and merchandise since 1996. In just two short decades, the MUM brand has grown into a nationally-recognized icon for independent musicians and fans.
Latest from the Blog